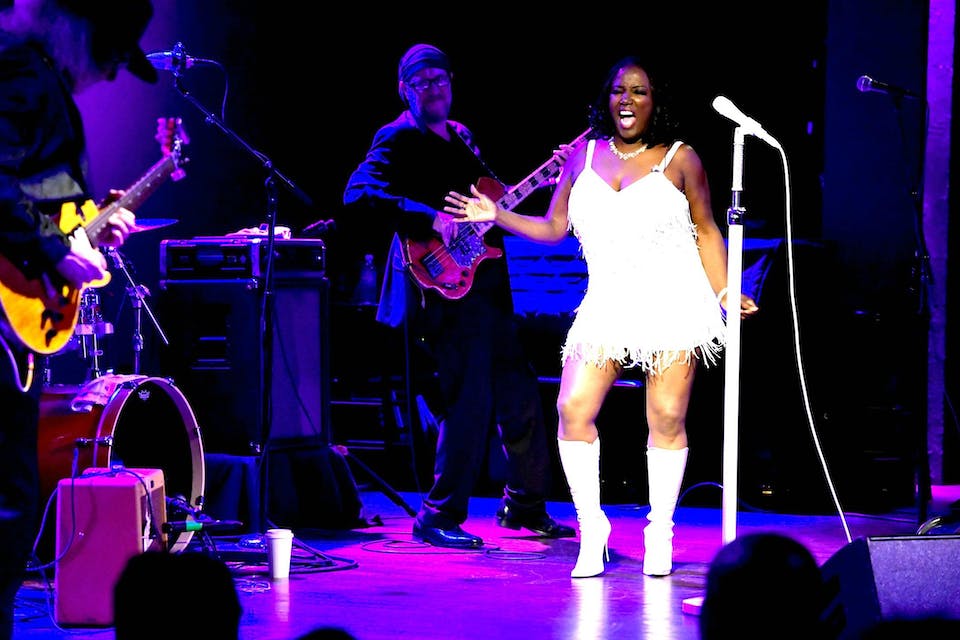 Hard-driving blues rhythms and soul grooves fuel the blistering performance of D.C.-based soul-blues band Robbin Kapsalis and Vintage#18. After attending a performance, John Porter, WCVE declares, “Vintage#18 is a band you have to see live in order to appreciate their level of performance.”

Performing together since 2013, the band sharpened their sound and performance chops in clubs throughout Washington, D.C., Maryland and Virginia. In 2016, they represented the Central Virginia Blues Society at the International Blues Challenge in Memphis, Tennessee and afterward immediately began working on their debut album Grit.

The album reflects the band’s love of classic 60’s Soul and Blues, featuring a mix of originals as well as two covers (ZZ Top and Bob Dylan). Grit debuted at #5 on the Roots Music Report’s Top 50 Soul Blues Album Chart and held the #1 spot for six consecutive weeks, and has floated in the Top 10 since its release; also charting #17 on the Roots Music Report’s Top 50 Blues Albums. The band received their first industry nod in early 2017 - a Blues Blast Music Award Nomination for New Artist Album Debut.

Vintage#18 chose to self-produce Grit, and a framework was in place before most of the album was written. One of the goals when they first started writing, was to make sure that their sound didn’t fit solely into a single genre. Blues, Soul and other familiar elements appear, however they’re mixed in a way that brings unexpected experiences for both listeners and dancers. This idea worked well in live settings, so the album was approached the same way.

The band’s live performances generated quite the buzz throughout Washington, DC, Maryland, and Virginia. Mark Wenner of the Nighthawks says“Robbin is a whirlwind of soulful excitement backed by one of the tightest trios in the trade”; and Nick “Dr. Nick” Johnson, WPFW declares “Their onstage performance, with Robbin’s boundless energy, will leave you breathless”. Vintage#18 soon found themselves opening shows for many national acts touring through the DC-area that include The Nighthawks, Billy Price, Lil’ Ed and the Blues Imperials, Albert Cummings, Selwyn Birchwood, Roomful of Blues, Duke Robillard and Vanessa Collier.