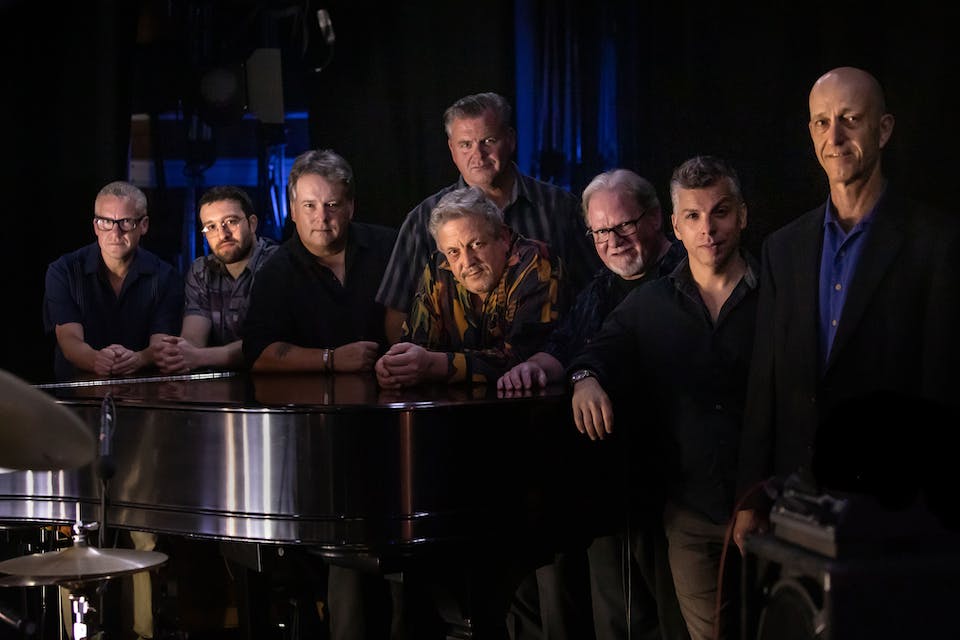 iCal
Google
One of modern blues' best touring acts brings their original, dance-ready Blues party back to The Soundry!

Even though Roomful of Blues’ lineup has changed over the years, the band has always been one of the tightest, most joyful blues ensembles in the world. Currently an eight-piece unit led by guitarist Chris Vachon, the band has never sounded fresher or stronger. Singer Phil Pemberton brings his sweet and soulful vocals and adds another bright new dimension to the jazzy, jump-blues musical roots. Their winning combination of jump, swing, blues, R&B and soul remains their calling card, as does their ability to fill the dance floor. Along with bassist John Turner, trumpeter Carl Gerhard, drummer Chris Anzalone, keyboardist Rusty Scott, baritone and tenor saxophonist Alek Razdan, and tenor and alto saxophonist Rich Lataille, Roomful keeps on rockin’ into 2020!

With a non-stop performance schedule for over 50 years, Roomful of Blues has earned critical, popular and radio success and a legion of fans across the globe.

According to DownBeat magazine, Roomful of Blues “are in a class by themselves.” With their masterful combination of jumping, horn-heavy, hard-edged blues and R&B, it’s no wonder why the great Count Basie called them “the hottest blues band I ever heard.” Since 1967, the group’s deeply rooted blend of swing, rock ‘n’ roll, jump, blues and soul has earned it 5 Grammy Award nominations and a slew of other accolades, including 7 Blues Music Awards and the prestigious DownBeat International Critics Poll for “Best Blues Band”.

As leader of his own bands for the last 20 years, this Massachusetts native has found himself playing to intimate clubs all the way to large festivals, throughout the US, England, France and Canada. In addition, The Philip Pemberton Band was also the 1st Western band to play in the former capital of China, Xi’an on a 2 week tour broadcast to ½ a billion people throughout Asia.

“His voice can ache with tenderness, or rattle the rafters with its power…”-Patricia Smith (Pulitzer nominated Journalist) Boston Globe

“This man could sing his way outta Jail…” -Bill Smith

Chris is a true multi-talent. His prowess as a guitar slinger is well- documented, and his strengths as a producer and songwriter grow from album to album. He produced the band’s eight most recent albums—There Goes the Neighborhood (1998), Watch You When You Go (2001), Live at Wolf Trap (2002) the Grammy nominated That’s Right! (2003), and Standing Room Only (2004), Raisin’ A Ruckus (2008), Hook, Line & Sinker (2011) and 45 Live (2013) after co-producing all of Roomful’s other albums recorded in the ’90s. Chris’ songs—such as “Turn It On! Turn It Up!,” “Running Out of Time,” “She’ll Be So Fine,” “Blue, Blue World,” “Dynamite” and “Keep on Rockin'"—have become firm favorites in AAA and blues radio formats, bringing many new fans into the Roomful fold.

A veteran of the New England jazz scene, bassist John Turner has performed and recorded with just about everybody–specifically the Either/Orchestra, Charlie Kohlhase, Scott Hamilton, Roswell Rudd, Lee Konitz, the Tommy Dorsey Orchestra, members of Ornette Coleman’s band, and , Magic Dick-Jay Geils and Blues Time to name a few. John’s rock solid bottom is the essential element of the swing groove which Roomful is renowned for.

Rusty Scott - Piano and B3

Rusty Scott has been a fixture on the Boston jazz and blues scene for a number of years now. He began playing piano at the age of eight. His jazz studies began with Burlington jazz musician, Bruce Sklar, while attending the University of Vermont. In 1989 he attended Berklee College of Music. Rusty also plays Hammond B3 organ and in addition to being a member of Roomful of Blues he currently heads up the Rusty Scott Organ Group, playing major venues throughout Boston and New England. Rusty’s solid rhythm, driving piano solos, and howlin’ organ riffs are a first-class addition to the Roomful tradition.

From Medford Massachusetts, Chris has spent many years as a drummer in various blues bands from the East Coast including The Woodburn Arena Band, Tony Lynn Washington, The Matt Stubbs Band with Dennis Brennan, Brian Templeton, and most notably he was the longtime Drummer for Johnny Hoy and the Bluefish. Chris is a former student of legendary drum instructor, Bob Gullotti. Chris has a solid feel, swing and shuffle making him a great addition to Roomful of Blues!

Rich joined Roomful in 1970 and was there at the beginning of what has become the most legendary horn section in contemporary blues. It was Rich’s interest in the swinging bands of the ’30s and ’40s that led Roomful to forge the distinctive sound that has become the band’s trademark. A man who can play both sides of the fence, lyrically tender or blisteringly hot, Rich has a big, warm tone that is always jam-packed with feeling. His melodic inventiveness reflects the depth and breadth of his wide-ranging influences. Rich worked with various local and high-school bands before beginning his long-term relationship with Roomful.

Hailing from Rockport, MA, Alek Razdan is truly a lifelong fan of Roomful of Blues, exposed to the band’s LPs from his parents’ record collection since before he could walk. Idolizing the tone, energy, and conviction of saxophone greats such as Illinois Jacquet, Big Jay McNeely, Arnett Cobb, Red Prysock, and Eddie “Lockjaw” Davis, Alek is a perfect fit as the newest member of Roomful’s legendary horn section. Since he began performing at the age of 8, Alek has shared the stage with and/or benefited from the mentorship of Mark Earley, Sax “Gordon” Beadle, Bobby Hebb, Barrence Whitfield, Whoopi Goldberg, Willie “Loco” Alexander, and many others. When not performing with Roomful, Alek can also be found playing in the air-tight horn section of The American Symphony of Soul, a 9-piece Boston-based funk band, and The A-Train Orchestra, his own blues and jazz group based out of Boston’s North Shore.

Carl “Geerz” Gerhard is a Basking Ridge, New Jersey native. He recently finished a 30-yr career in the U.S. Navy Band, first as a performer, and ultimately, as Director and Conductor. He has led Navy Bands in the United States, Europe and the Far East, performed in over 20 countries, and has also conducted both the Tokyo Symphony and Boston Pops orchestras multiple times. As a trumpeter, he has toured and recorded extensively with the iconic rock band Phish as an original member of The Giant Country Horns.

Laying down his roots now in New England, Carl’s pure melodic style, infectious energy, and love of the blues can be heard every time Roomful of Blues takes the stage! 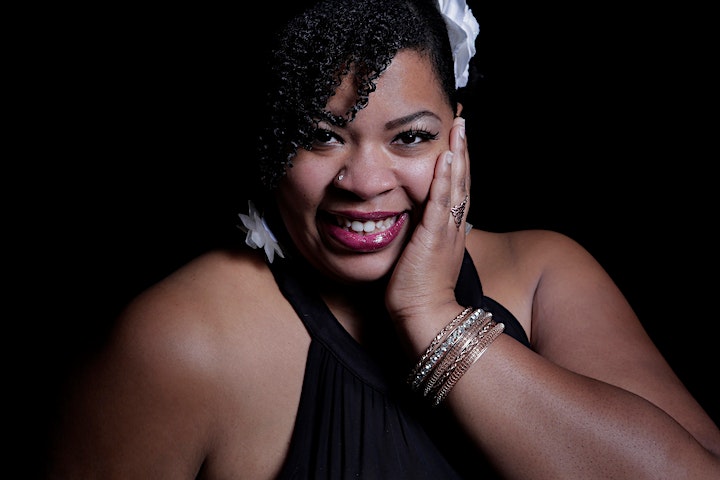 Based out of Washington, DC, Carly Harvey combines Blues, Jazz, Soul, & Americana roots styles to create a unique sound that calls to mind Etta James, Bonnie Raitt, Nina Simone, with a little Ella Fitzgerald thrown in for good measure. In July 2018, Ms. Harvey was featured in Big City Blues Magazine as one of the youngest Blues artists to watch. She has had the privilege to share the stage with iconic musicians including Annika Chambers, Ron Holloway, Kebbie Williams, Ephraim Owens, Cory Henry, Kofi Burbridge, Junior Marvin, and Susan Tedeschi, another artist whose work has been foundational to her musical evolution.

Carly is a two-time DC Blues society Battle of the bands winner (duo 2016, band 2018) and was proclaimed DC's Queen of the Blues in 2016 by Dr. Nick Johnson of WPFW Radio.

Carly's band represented DC in the International Blues Challenge in Memphis in January 2019 and advanced to the Semi-finals.

In Early 2019 released a new EP titled Kiss & Ride Vol. 1 and the hit single " She Ain't Me" is charting on regional blues radio stations. She was shortly after voted 2nd place for Best Performance Artist in Washington City Paper's " Best of DC 2019" In January 2020 Carly received a Wammie Nomination for Best Blues Artist. Carly’s award winning Project Kiss & Ride is a high energy blues ensemble intended to extend blues to younger audiences and bridge the age gap between blues aficionados by combining current music with blues arrangements in the same set with blues standards, blues funk, soul and some original music too.