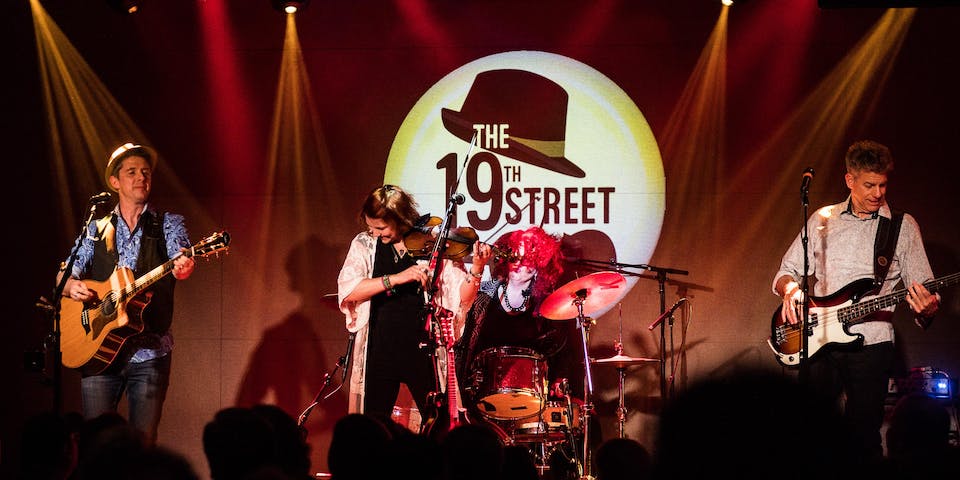 Caolaidhe came to America from Holywood, Northern Ireland in 2005 to pursue a career in music. While establishing an earlier band, he found himself in need of a fiddle player. As fate would have it, Meghan (a classical violinist) was working at an Irish pub in DC as a server while teaching music at a nearby public school. Through Caolaidhe’s acquaintances, he was lucky enough to meet Meghan and quickly auditioned her for the band. What Caolaidhe didn’t know was that he was auditioning his future wife. Fast-forward a few months down the road, and Meghan and Caolaidhe found themselves living on ’19th Street’ in Arlington, VA, writing songs and creating the sound that would become the backbone of The 19th Street Band.

Characterized by high energy and strong vocal harmonies, The 19th Street Band brings to the house a fusion of Americana, country and rock. Together they ignite an audience with their love for music, combined with a magnetic passion and enthusiasm. Add to the mix their talented rhythm section, Patty Dougherty (drums) & Greg Hardin (bass), and this band will undoubtedly get you rockin’ & a-rollin’ through the night.

The 19th Street Band has had the honor of sharing the stage with country music stars such as Rodney Atkins, Craig Morgan, and Chuck Mead. They have opened for The Wheeler Brothers and Spirit Family Reunion at The Hamilton as well as Grammy Award-winning Western Swing icons, Asleep at the Wheel, at The Birchmere. They have also packed the house at such venues as the 9:30 Club, Black Cat, Strathmore, Jammin’ Java, Rock & Roll Hotel, Kingman Island Bluegrass Festival, The Washington Folk Festival, Tootsie’s Orchid Lounge in Nashville, The Black Box in Belfast, and Hill Country BBQ and Pianos in NYC. The 19th Street Band has steadily been performing 230 shows a year for the past 5 years, and they are recently back from a tour in Northern Ireland, where they performed live on BBC Radio Ulster and were a part of the Open House Festival in Bangor. Their new album, The Things That Matter, is currently getting air play on BBC Radio and multiple radio stations throughout the UK.